CBC Lesson from the 23rd to 29th December

The Wise Men
During the time when Jesus was born there was a very mean king who ruled the land, his name was King Herod. Remember his name, because we will talk about him later.
Soon after Jesus was born, wise men were traveling on their camels; one night they noticed a very strange star in the sky.  They knew that this star meant that the King of the Jews, the One who would save the world had been born.
When the mean King... ( what was his name again?) Herod heard this he got very worried.
He called a meeting with all the other important people in the area and asked them where this special baby had been born.  The people replied, "In Bethlehem, because they heard that one day a special person would come from there and take care of all the people."
Then King Herod called the wise men to a secret meeting and found out from them exactly where they saw the star.  He then told them, "Go and find this child.  As soon as you find him, tell me, so that I can go and worship him."
After they had spoken to the King, the wise men left to find the baby.  They didn't know exactly where the baby was, but at night they followed the star in the east.  They followed the star until it hung right over the very place where Jesus was.
When they finally had arrived they were very excited and happy.  They found Jesus laying in Mary's arms, and they bowed down and worshipped him.
After that they opened the gifts they had brought Jesus.  They were gold, frankincense and myrrh.  These were very expensive gifts, gifts that you would give to a King, not to a baby.  Mary thanked them for bringing the gifts for Jesus, and the wise men went to find a place to sleep for the night.
As the wise men were sleeping, they each had the same dream.  They were not to go back and tell King Herod where they found Jesus.  King Herod didn't want to find Jesus to worship him, he wanted to kill him because he was jealous that this baby would someday be better than him.
So the wise men went home another way so that Herod would not know where they had come from.  They also decided that they would not tell King Herod anything about what they had seen.
When the wise men had left, an angel appeared to Joseph in a dream.  "Get up," the angel said, "take Jesus and Mary and run away to Egypt.  Stay there until I come to you again, because Herod is going to search for Jesus to kill him."
Joseph immediately got up and woke up Mary, and she gently picked up Jesus so he wouldn't wake from his sleep.  They left in the middle of the night for Egypt, so no one would see them.
They were safe in Egypt, and after King Herod died an angel appeared to Joseph and told him could go to a place called Nazareth.  And that's where Jesus grew up.

Ask them who they think was the real King of the Jews, King Herod, or the baby that the wise men found?  Why didn't anyone else in Israel know that the star meant that Jesus was born?  Because no one was looking and listening for God's signs.  What if God is speaking to you but you're not listening?  Then let's pray for God to help you hear His voice and see the signs He gives you so you can see the miracles you need.
Enjoy the activities and have a great week!

Let's prepare some craft of the wise man, colouring, cut and glue 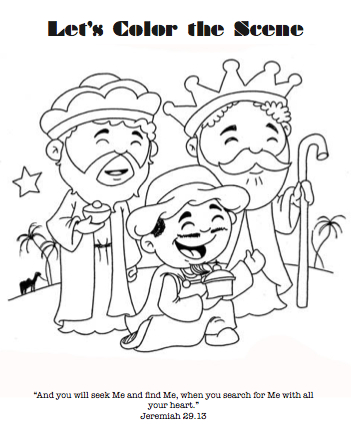 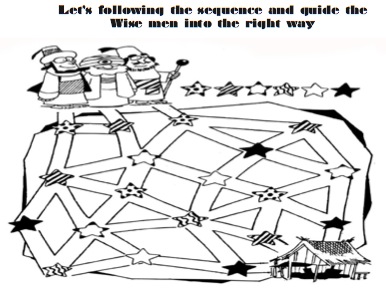